I'm not going to cinnamon sugar coat this. I got annoyed when making this recipe for a few reasons. It was Monday night and I didn't really feeling like baking but I did it anyway. The dough was a hot sticky mess and I was trying to rush. These things lead to my frustration. But when all the hard work was said and done and the steaming cinnamon rolls came out of the oven all was well. Once they cooled and I poured the glaze on them and took a bite....I was in heaven and they were worth it. On any other day I would have been fine but I think the fact that I wasn't in the mood to bake played a big part. And as far as the dough being a mess, once I added more flour it was workable and tolerable. I'm making this sound really great, right? Actually it is. Just make sure you're in the mood to bake.

Heat up the milk in a small saucepan on low until it begins to bubble then remove from heat. Mix in 1/4 c butter and continue stirring until it's melted. Set aside and let cool until lukewarm.

In a large bowl mix together 2 1/4 cup flour, yeast, sugar and salt. Add water, egg and the lukewarm milk mixture and beat well. Add the remaining flour 1/2 cup at a time while continuing to stir. 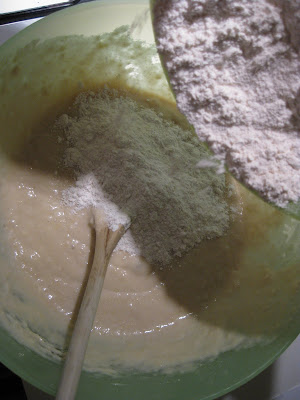 Adding the reamining flour while stirring


You may need to add more flour than what the recipe calls for. I needed to add about 3/4 cup more just to get the dough to a point where I could knead it. I was not expecting it to be so sticky. It was a bit messy at first so I kept adding flour until it wasn't sticky. Once you get the dough to a good point knead it for about 5 minutes. 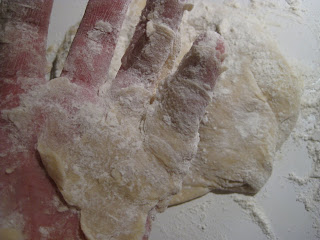 Dough stuck to my hands...bleh
After kneading, put the dough in a large bowl. Cover with a damp cloth and allow to rise for about a half hour. While you're waiting you can mix the filling.

In a small bowl mix together the brown sugar, cinnamon and softened butter.
When the dough has risen, roll it out into a 9 x 12 inch rectangle. Evenly spread the cinnamon butter filling over the dough making sure to cover the whole thing. This wasn't the easiest task. It took a few minutes to get it spread evenly. 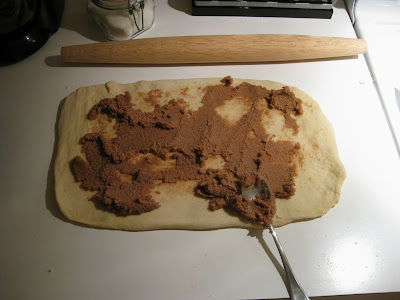 This was before it was spread evenly...obviously :)
Once you have spread it evenly roll it tightly until you have a 12 inch cinnamon roll log. Slice into 10 even pieces. 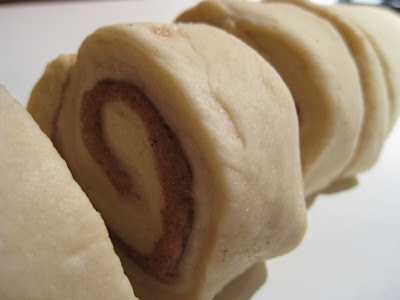 mmmmm
Coat muffin tins with cooking spray and place rolls cut side up in the tins. Cover with plastic wrap and allow to rise for 45 minutes. Just before the rolls are finished rising, preheat oven to 375 degrees F. Bake rolls for 20 minutes or until brown. Remove from oven and let them cool slightly. 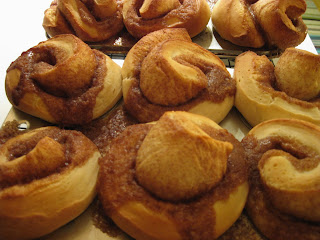 Now it's time to make the glaze!

Melt the 4 tbs of butter in the microwave or on the stove top. Do not overheat. Add vanilla and stir. Add the powdered sugar and water as needed. If the glaze is not thick enough as it was in my case, add a little more powdered sugar while stirring until you get the desired consistency.
Now slather it on the cinnamon rolls and eat 'em up! After all my hard work was done I realized it was all worth it. They were deeeeelish!
Posted by David at 7:53 AM

Email ThisBlogThis!Share to TwitterShare to FacebookShare to Pinterest
Labels: Rolls