This autumn has been amazing. I have truly been enjoying all the things it has to offer. Taking walks, enjoying the changing foliage, baking, traveling to Michigan with Rob, touring wineries, sampling wine (yum!), apple picking, apple cider, more apple picking (I have apples coming out of my ears), pumpkin carving….I could go on and on! And it’s not even over. 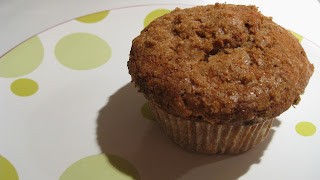 Since I have so many apples I’ve been making a variety of apple-related baked goods. I adapted this recipe from SmittenKitchen.com.

With a mixer in a large bowl, cream the butter, white sugar and 1/4 cup brown sugar until it’s fluffy. Add the egg, milk and creamer. Mix well. At this point my butter/milk mixture looked odd. There was separation with the milk and butter but once I finished the next step it combined well and everything was fine.

Slowly add the flour mixture to the butter mixture and beat until combined. Fold in the apple pieces and evenly distribute.

Pour batter evenly into 12 muffin tins and top evenly with remaining brown sugar. Bake for 15 minutes. Insert a toothpick into the center of a muffin and if the toothpick comes out clean remove from the oven and cool. If not, bake an additional 5 minutes then check again. Repeat if necessary.

* The original recipe called for 1 cup of buttermilk which I didn’t have. So I used the 2/3 skim milk and 1/3 pumpkin spice creamer. It tasted yummy but if you have a cup of buttermilk you can use that.
Posted by David at 1:25 PM 2 comments:

I'm really enjoying fall this year. This is the first time in a long time that I carved a pumpkin early. Normally I do it right before Halloween. I picked a pumpkin a few weeks back when I went apple picking. It was only $3 for a big pumpkin. If you go to the grocery store you pay over two times as much for a half rotten one. So $3 is a great deal. I'll be traveling up to Michigan soon so I hope to grab one or two more pumpkins to carve right before Halloween.
So I made a rough sketch of what I wanted my pumpkin to look like: 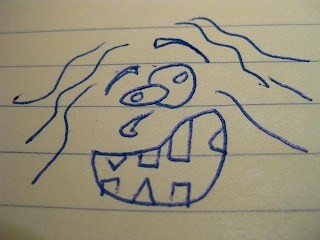 Yikes!﻿
He's a little creepy huh? ﻿Well I unfortunately didn't have an erasable marker so I couldn't sketch onto the pumpkin itself so I decided to free-hand cut the entire thing (after a glass of wine). So...It didn't exactly turn out the way I wanted it to because I made a few mistakes but it's kinda close: 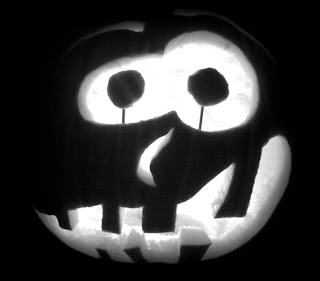 I put it in the window to scare people away: 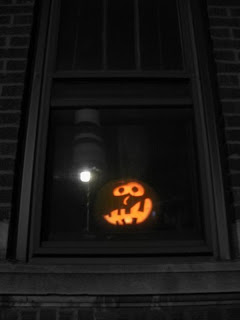 Boo!
It must have worked because no one rang my doorbell all night! ﻿Okay...it's rare that anyone ever rings my doorbell but still...
This little pumpkin has so many seeds. So of course I had to roast them. I posted this recipe last year. This year I used real butter. They turned out really tasty so I recommend using butter.
Look, I made a scary face in the uncooked seeds: 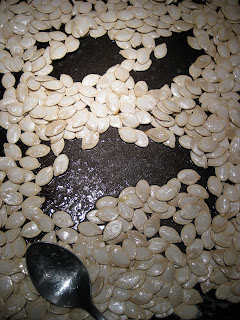 arrrgh!
So, as always the seeds turned out delicious. Next time you roast pumpkin seeds use this recipe! 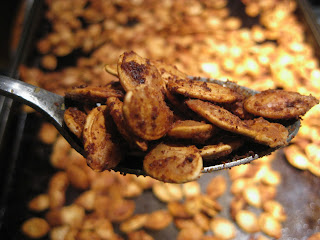 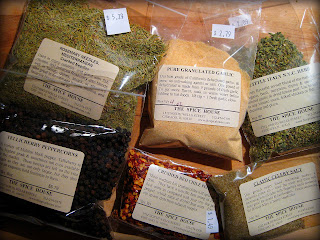 It always seems like I run out of multiple things at the exact same time. Like toothpaste, shaving cream and contact lens solution. All gone, at the same time! It's the way of the universe I suppose. Well that happened with my spices last week. I needed peppercorns, garlic powder, rosemary, crushed red pepper, celery salt and Italian seasoning. So I went to my favorite spice buying place, The Spice House. LOVE this place. I could spend hours and hours just smelling and tasting their spices. The thing I like about The Spice House is that I can buy small amounts of spices at a time. Since spices typically don't have a long shelf life it's best to buy them in small quantities and replenish when needed. I got all those spices for $18.50. A great deal for guaranteed fresh spices!  And I love that they hand write your order. You don't see that very often. 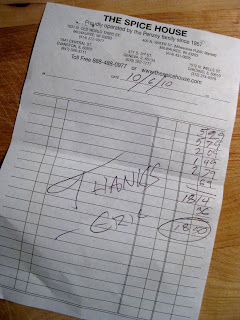 Email ThisBlogThis!Share to TwitterShare to FacebookShare to Pinterest
Labels: spices 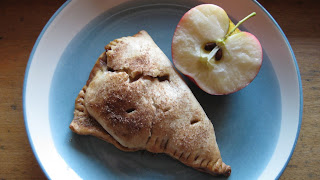 Since I have so many apples I'm (of course) doing lots of baking with apples. This recipe is easy, mostly because I used pre-made pie crust. All you crust snobs listen up. When you're in a pinch these do the trick! Pre-made obviously isn't as good as homemade but Pillsbury makes a really tasty pre-made crust. The same day I made these I made my caramel apple pie. So I doubled this recipe and made about 16 turnovers and froze them (uncooked) for future eating. Follow this recipe for 8 turnovers. Double if you want 16.

1. Melt butter in a large skillet. I used a large cast iron skillet but you can use a non-stick if you don't have it. Place the sliced apples in the skillet and cook for about 2 minutes, stirring frequently.

3. In a small bowl combine the cornstarch and water. Stir well then add to the apple mixture.

4. Cook the apples for another 5 minutes until the sauce thickens up. If you use apples that are juicy you may have to cook for a few extra minutes. 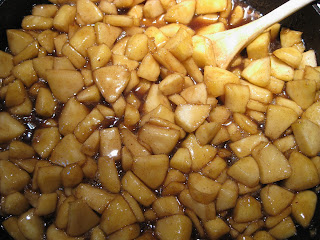 5. Remove skillet from heat and allow to cool about 20 minutes.

6. Unroll the pie crust then cut the crust in half, then in half again like the diagram below: 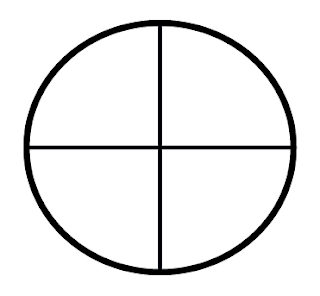 7. Brush a little water around the outside edges of the cut pieces. The water will help seal the dough together when you fold it over.
8. Add about 2 tablespoons (you might need a little more) of the apple mixture to one side of the piece of dough. See diagram below (pretend the black blob is 2 tablespoons of apples...ha ha): 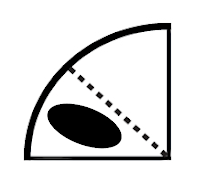 9. Fold in half, where the dotted line is. Press down the edges of the unsealed sides with a fork. Poke a couple little holes in the top of the turnover.

At this point you can wrap them individually in plastic wrap and freeze for future use or you can bake them right away and eat them.

11. Bake for 20 minutes then remove from the oven. Brush with melted butter then sprinkle cinnamon sugar over the top. Put back in the oven and bake another 5-10 minutes.

12. Remove from the oven and allow to cool for 20 minutes before eating.

This recipe is great! Go make some turnovers!
Posted by David at 8:45 AM 6 comments:

Rob and I went apple picking this past Saturday. It was a perfect fall day. Cloudy, cold and windy with the subtle smell of Autumn in the air. We drove up to the Illinois/Wisconsin border to a place called Oriole Springs Orchard. It's a 'no frills' kind of place. There aren't hay rides, corn mazes, thousands of kids running around screaming or any fun-filled family activities. It's just an orchard, with apples. I've already decided that this is going to be a yearly tradition. They had three different types of apples; Golden Delicious, Red Delicious and Jonathan. We chose to only pick the Golden and Jonathan. The Red was our least favorite of the three. We took our time picking and managed to get half a bushel which cost us $18. Not a bad price in my opinion. After our apple picking we drove down the road to Harvest Time Orchard to try their famous apple cider shakes. It was one of the best shakes I have ever had. It's worth it to drive the hour and a half up there just for these shakes. They also make apple cider and you can watch the process. So we sipped our shakes and watched them make apple cider. A perfect day! Now I have apples coming out of my ears so there is a lot of baking in my future. I've already made apple turnovers and my caramel apple pie and I still have more apples than I know what to do with. :) 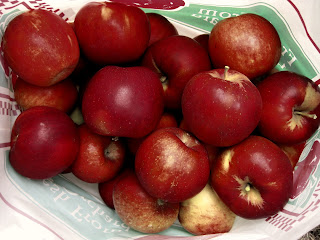 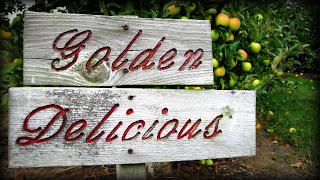 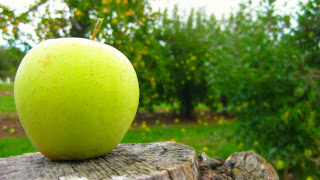 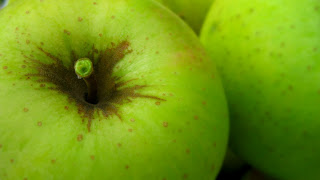 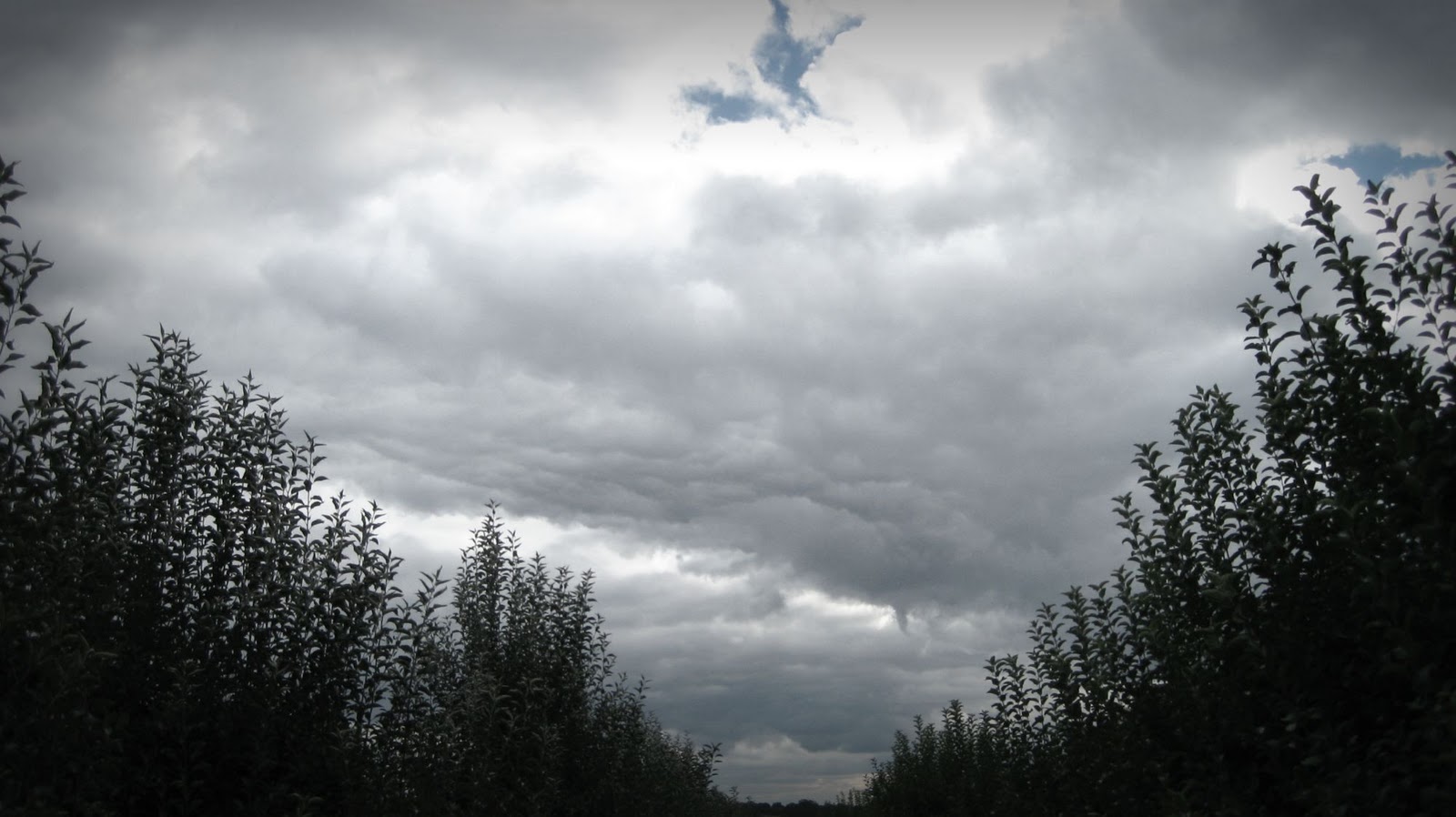 I love a cloudy fall sky 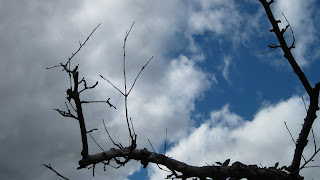 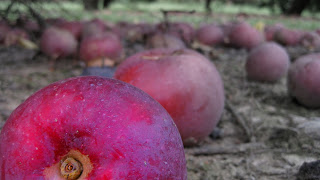 Fallen fruit
Posted by David at 9:23 AM 5 comments: