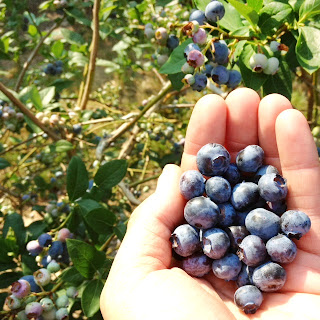 It's been a rough year for fruit in these here parts. We had a long string of 80 degree days back in March. The fruit trees prematurely bloomed and then a frost came in April and destroyed the early blooms. Each year I go blueberry picking in Michigan around the first two weeks of July. This year there were very few places doing U-pick because of the damage to the blueberry crops. The same goes for cherries, peaches, and apples. Not the apples! My favorite thing to do in autumn is to go apple picking. Huff huff. There has been a drought this summer as well. All of these factors are affecting farmers and their crops. Such a shame.

Even with the lack of U-picks for blueberries, I did manage to pick some a few weeks back. Last year I picked 10 pounds of blueberries. On the day I picked this year, it was in the upper 90s and humid. Horrendous temps for picking. I literally almost passed out in a giant pool of sweat. So Rob and I only got two and a half pounds. Such a disappointment since each pound was only a $1.70. Huff huff, again.

I am going to put them to good use though. Tonight I am going to make a peach and blueberry cobbler in a cast iron skillet. Stay tuned for the recipe. Email ThisBlogThis!Share to TwitterShare to FacebookShare to Pinterest
Labels: Adventures