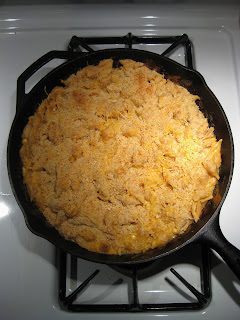 I love cooking in cast iron skillets. They can last a lifetime and I find that food just tastes better cooked in a cast iron skillet. I wanted to make a baked macaroni and cheese that was lower in fat. I pretty much just made up this recipe and it turned out surprisingly well.

1. Cook pasta per the directions on the box but cook one minute less. Drain, then mix with sour cream in a large bowl then set aside.

2. In a non stick pan on medium heat combine Parmesan cheese and bread crumbs. Cook for about 5 minutes, stirring constantly. Remove from heat then set aside.

3. In a medium sized pan combine evaporated and skim milk and heat on medium until the milk begins to bubble. Add 4 ounces of Cheddar, 4 ounces of Monterrey, mustard, black pepper and salt. Stir constantly until the cheese has melted. Remove from heat and immediately pour into the pasta and sour cream mixture. Stir to combine then pour into a 10 inch seasoned cast iron skillet.

4. Evenly sprinkle 1/2 cup shredded cheddar cheese and Parmesan cheese and bread crumb mixture on top. Preheat oven to 400 degrees F then bake uncovered for 15 minutes. You want to top to be a little crispy and bubbly.

5. Remove from the oven and allow to cool for about 15 minutes before serving. Remember, cast iron skillets stay hot for quite a long time so be careful when handling the skillet. 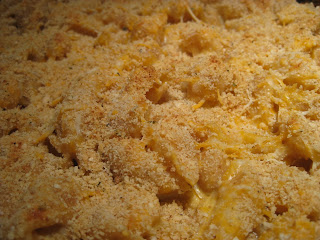 I made bruschetta with this and it was a great combo. Enjoy!
Posted by David at 12:38 PM