So I thought making chocolate covered strawberries would be a difficult task. It seemed like the kind of treat that you leave to the chocolate stores to concoct on Valentine's Day or Sweetest Day. I was having a conversation with a co-worker that inspired me to try it. Honestly, it's inexpensive and super easy. All you need are some strawberries and your favorite kind of chocolate. Personally, I prefer dark chocolate in general so that's the kind that I bought. Now there are two ways of melting chocolate. You can use a double boiler or you can put the chocolate in microwave safe bowl and throw that bad boy in the microwave and nuke it. Either way is fine.

Some people leave the leaves on so there's a pretty contrast between the chocolate, the red part of the berry and the green leaves. I wasn't concerned about appearance, I just wanted lots-o-chocolate. So I pulled the leaves off and dipped the entire thing into the chocolate, rolled it around a bit and slapped it onto a piece of wax paper. Eating them can be a bit messy since the whole thing is covered in chocolate but it's completely worth it. Now after dipping the strawberries and placing them on wax paper, put them in the refrigerator for at least a half an hour to set. Once they have set, eat 'em up! They are such a delicious treat. 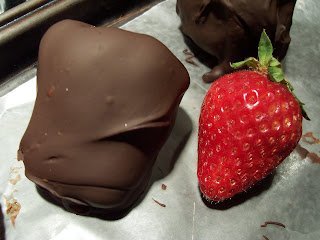 Covered in yummy dark chocolate!
Posted by David at 4:00 PM

Email ThisBlogThis!Share to TwitterShare to FacebookShare to Pinterest
Labels: Candy